ARE YOU READY????
I hear Nauti Boy has already been sighted at many bookstores. Readers comments have already started coming in and so far, it's being enjoyed. Have you found your copy yet?


They're the cousins of the Men of August. Three cousins who have their own demons to combat, and their own battles to fight. And perhaps the hardest battle of all, is that of love. 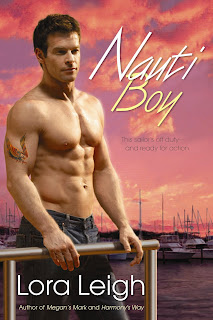 Too weak to resist his step-sister’s attempts at seduction, Rowdy Mackay left home eight years ago. Duty as a US Marine put safe distance between temptation and the nubile Kentucky vixen with persuasive desires of her own. Now he’s returned home, his fantasies fueled, ready to engage the young woman in the kind of erotic games that have earned him and his two cousins a Nauti-boy reputation in three counties.
Once it was Kelly’s dream too—to feel the heat of the boy she desired. But a brutal attack from a stalker still on the prowl has left Kelly terrified of the dark unknown, and of a man’s touch. Now as fear and desire converge, Rowdy fights for the only woman he ever loved, to save her from the deadly threats of a stranger, to rid her of her demons, and to satisfy a hunger more powerful than either can imagine.
Posted by Lora Leigh at 9:08 PM

My friend gave me Nauti Boy to read and she said it would be a wonderful book. Well she was right and then some. I cant wait till I can read Nauti Nights. Thanks Lora Leigh.