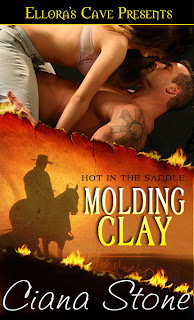 Another Recommended Read. I highly suggest trying this one out.

Book 2 in the Hot in the Saddle series.

Clay Russell had plans. Win the Nationals in bull-riding, then start his own spread breeding horses. Instead his family roped him into leaving Arizona to get a struggling ranch in North Carolina back on its feet.

He didn’t expect it to be something beyond his ability. He didn’t expect Rusty Blackhawk to be a woman. Or a witch. But the little bundle of dynamite lit his fuse in more ways than one. Keeping his mind on the job and his hands off the saucy little Rusty was taking all his control, and then some.

Rusty had no choice but to take the Russells’ offer and partner up with them. She wasn’t expecting to like Clay Russell. But it was mighty hard to ignore the tall, handsome cowboy when her body—and her soul—was saying “yes! yes! yes!”

Neither of them expected the fireball of passion that exploded between them, or the danger that would threaten their lives. But it was nothing a little bit of magic—and a whole lot of love—couldn’t fix.

i liked this one more than the first, which was unexpected. very rich read.

Thanks for the recomendation I added this author to my book list.